Shauna "Doc" Springer is known for pop-culture and mainstream insights in psychology and interpersonal relationships, affecting all people, originating from what she has gleaned from two decades of work at the extremes.

Dr. Shauna Springer is a graduate of Harvard University and is one of the world's leading experts on PTSD, Trauma, and Moral Injury among veterans. She co-hosts a weekly podcast on these topics in collaboration with MilitaryTimes. Her work has been featured on CNN, VICE, Dr. Oz, NPR, NBC, CBS Radio, Forbes, The Philadelphia Tribune, Washington Post, and Military Times. She is a regular contributor to Psychology Today.

The counter-intuitive truths I learned as a researcher and foremost expert in helping war veterans deal with trauma can help all of us have far better relationships and far deeper connection. 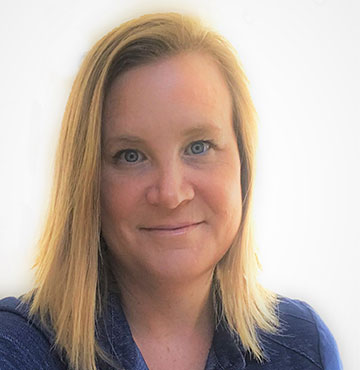 What can a 4-year study of 200 newlyweds teach us?

What can we learn from a massive sample of women who have a 6% divorce rate?

In 2008, I profiled over 1200 women, mostly Harvard graduates, in a sample with a divorce rate of just 6% - whose parents had a divorce rate of only 20%. More than 1200 participants answered over 200 questions, many of which were focused on the inner workings of their closest relationships. This project was the basis for my 2012 book, Marriage, for Equals.

What can we learn from hundreds of military veterans who have healed after trauma?

In the military and veteran community, I am known as “Doc Springer” for helping military couples strengthen their closest relationships. In this role, I have helped many military couples re-attach after lengthy separations and heal - together - after trauma exposures.

My work has been frequently featured in the MEDIA on Psychology Today, NPR, NBC, CBC, CBS Radio, Marine Corps Times, Military Times and the Bay Area television program “Veteran’s Voices.” In my role as Senior Director of Suicide Prevention Initiatives at the Tragedy Assistance Program for Survivors, I’ve given multiple talks and trainings to national audiences.

I’m also a writer and have written pieces for multiple news outlets. My Psychology Today blog series, which takes a fresh look at a variety of challenging topics, has had over 1.7 million hits.

I live with my husband and kids in Northern California. We love a good hike.

The Story Behind the Story.

Early picture of me as a kid

My friends all agree that “even by California standards,” my upbringing was “very unusual.” It’s quite possible that my father may have missed his calling as a Marine Corps Drill Instructor. He loved Pat Conroy’s The Great Santini, the story of Bull Meecham, the Marine fighter pilot who raised his kids like a drill instructor. In retrospect, I think he used Conroy’s novel as his parenting manual.
What did our childhood “Boot Camp” consist of?

My father would wake us three times a week at 5 a.m. starting at 5 years old, to run miles of laps, in the dark, around the local track. In addition to mandatory “PT”, we were required to compete in local track meets with t-shirts that said ‘property of team [my maiden name].’ There was never a year when my siblings and I didn’t win in our respective age categories – and this was expected of us. 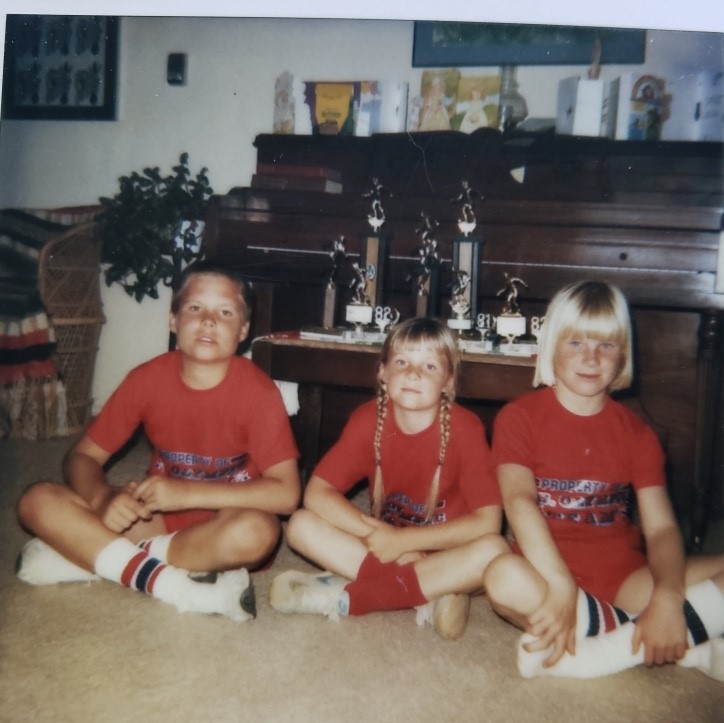 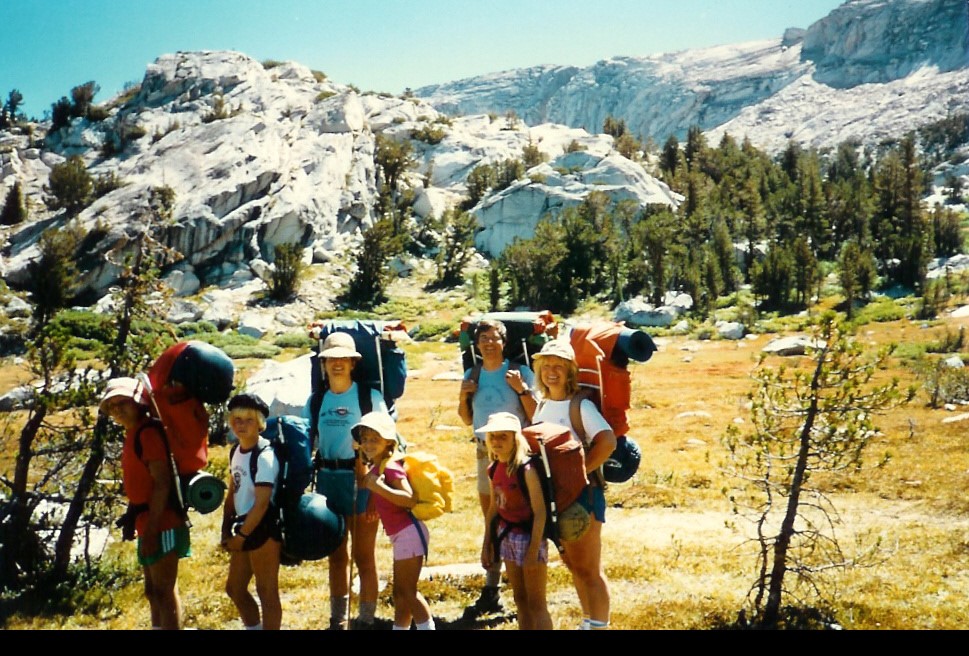 Even as kids we carried our own gear

Primitive hiking and camping trips at various National Parks was also a huge part of my early years. Before “rucking” was a thing, my siblings and I were doing it all over the country. From these experiences, I developed comfort with the kind of habitual discomfort that helps us meet our greatest goals in life. 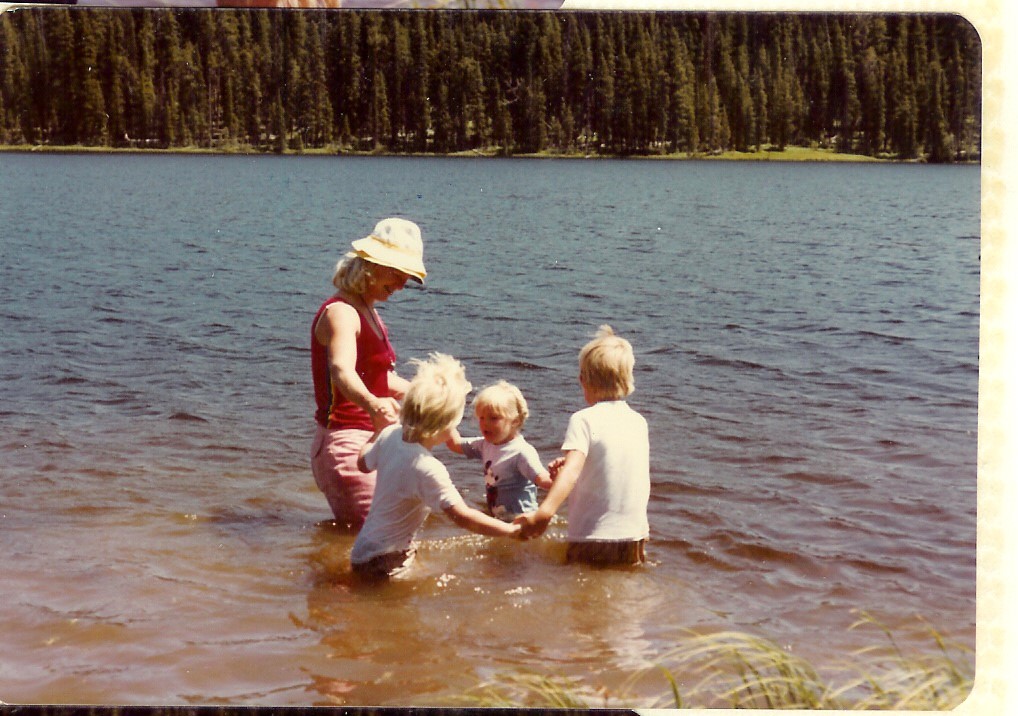 Cooling off in a lake somewhere in the Sierras on one of
our family hiking trips.

Starting at the age of 10, my parents sent us – alone – on service missions to foreign countries. My first trip took me to Mexico City, where I served with a family that ministered to those who lived in the garbage dump. The sights, and smells, are unforgettable…but not always in a traumatic way. I remember a group of kids, laughing and smiling, kicking around a “soccer ball” made of knotted rags, as they ran with bare feet so calloused that a “field” littered with shards of glass from broken bottles didn’t hurt them. From this experience, I developed service-oriented values and flexibility in my thinking. 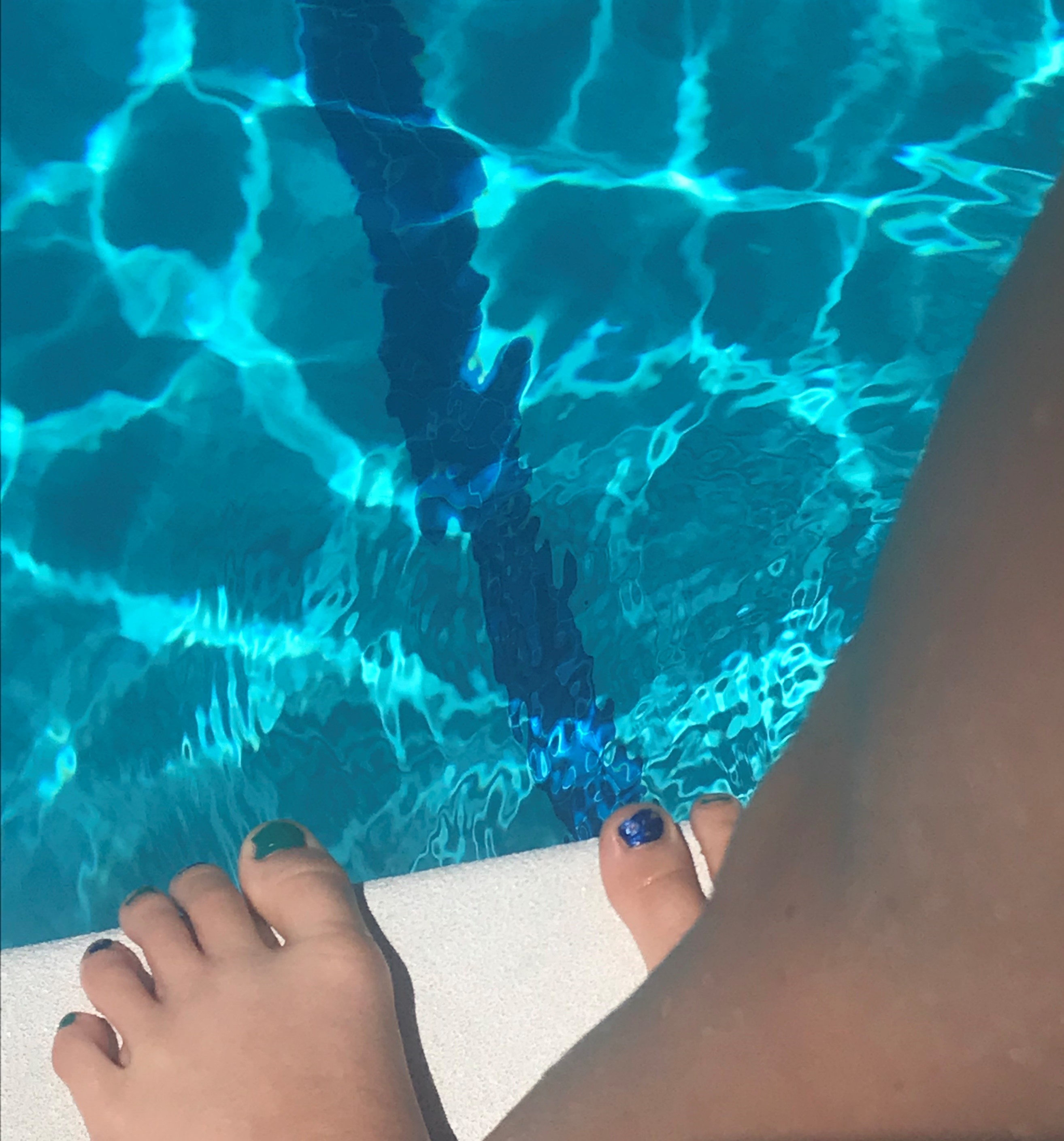 The Campaign Against Fear.

My siblings and I were also given challenges designed to push us through our natural fears. For example, at the age of 6, I was offered $10 to jump off an Olympic-sized dive platform. It was a test of both trust and part of my father’s campaign against fear since I couldn’t swim. The water looked like it was a mile away. I felt sure I would die, but I jumped, he scooped me out of the pool, and the $10 he gave me felt like $100,000 at the time. Experiences like this shaped me to not be ruled by fear. 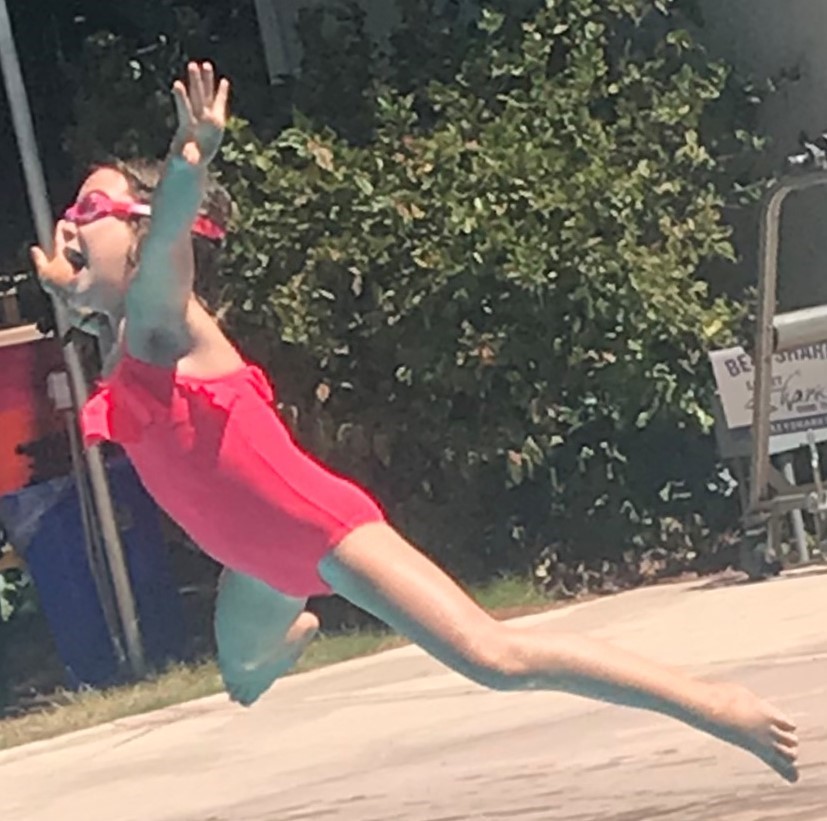 My daughter has a spirit like mine in many ways

As an adult, I’ve adopted many (but not all) of my parents’ values. I’ve built my life on values like service, self-discipline, and being brave in the face of challenges. As an adult, I continued to engage in foreign service trips, having adventures and a whole “life” of experiences before ever settling down for the long push of graduate level psychology training. 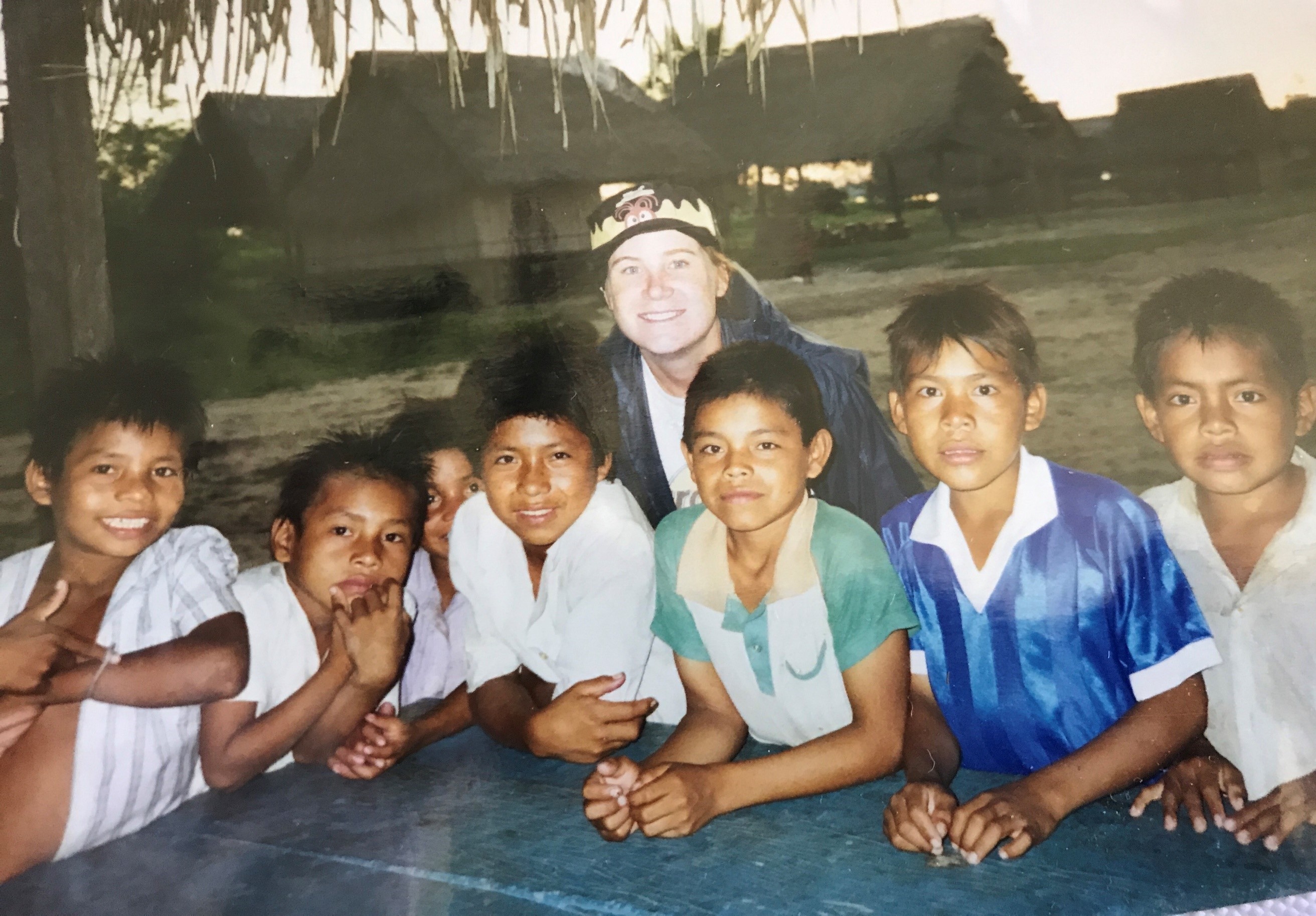 On The Amazon River with Shipibo Indians

For this reason, my understanding of human relationships is not “merely academic” – it has been forged through life experiences like hunting alligators (what they called “lagartos”) with Shipibo warriors on the Amazon River, working in a camp for severely disabled children in Pucallpa, Peru, and spending a summer living in a convent and working at the Vatican Library.

When my husband and I met as undergrads at Harvard in 1996, while most couples try to prolong the “cocaine rush phase” of their relationship, Utaka and I “tested” our relationship by going on a service trip to Chile, South America. We shoveled truckloads of rocks and mixed concrete by hand to help build a laundry facility for the Aymaran Indians in the Atacama Desert (where they say it has never rained). There was nothing sexy about the work we did, or the GI issues that came up on that trip, but that was the point – it showed us that our relationship was built on deeper things. 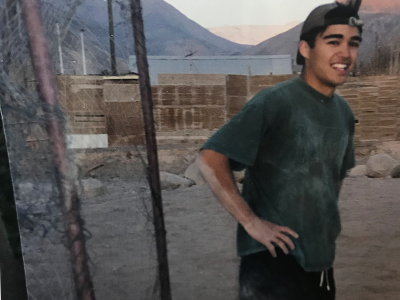 Utaka, in Chile, after a day of hard labor 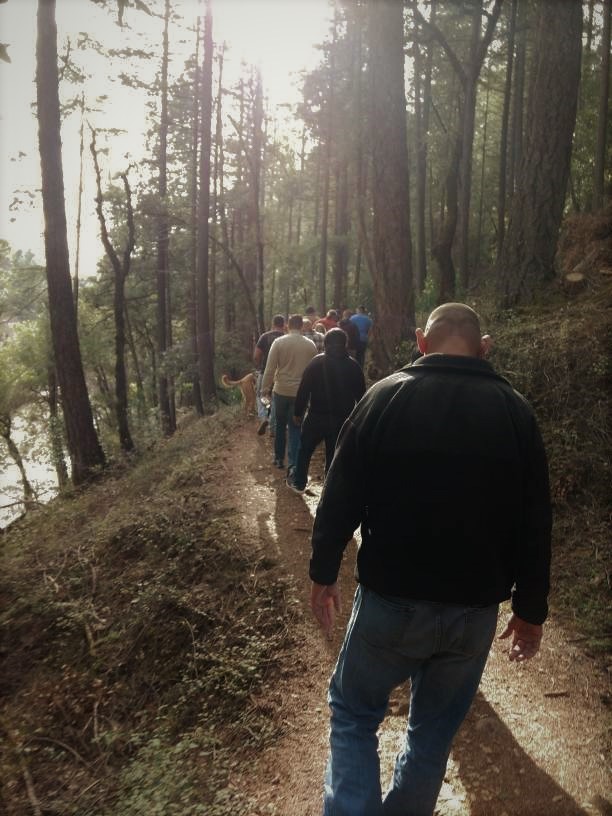 A walk in the woods with Marines

Because of my upbringing, working with military veterans has felt like “home” for me. I’m never more honored than when a service member refers to me as “Doc Springer” or “Devil Doc” since this refers to a trusted Doc who is seen as part of the Tribe. Military service members have made sacrifices that I haven’t. Because of this, I want to do what I can to bring veterans all the way home, into lives that are filled with purpose, and deep connection with their loved ones. As we have walked this path together, they have taught me a great deal about love and trust. For example, military transition is a high-risk time for close relationships, and I’ve addressed this as part of my work. “Why Your Relationship is at Risk when you Leave the Military"

Supporting Strong Relationships Through Military Transition and Beyond.

As part of my mission to support those we serve, I’ve partnered with Jason Roncoroni, a former Army Battalion Commander from the 101st Airborne Division, to write a disruptive book about military transition, called Beyond the Military: A Leader’s Handbook for Warrior Reintegration. Beyond the Military is a comprehensive, interactive resource that addresses the deeper psychological, cultural, and relational aspects of modern warrior reintegration. Learn more about what sets our work apart…

Coming Next: A Book about the Invisible Threads that Connect Us.

The “story behind the story,” then, is that due to some combination of nature, nurture, and psychology training, my unique ability is to see things in human nature that others don’t – I perceive patterns that reveal the invisible threads that connect us. It is these invisible threads and unwritten rules that I focus on in my writing and speaking. I am currently drafting a book that will summarize two decades of exploring the nature of human connection. It is tentatively titled, “BIND: The Surprising Truth about Human Connection.” Learn more…

Bio: I am a licensed Psychologist with an undergraduate degree from Harvard University, and a Ph.D. from University of Florida. I’ve spent the arc of my career thus far - over two decades of work – focused on how we connect (or fail to connect).